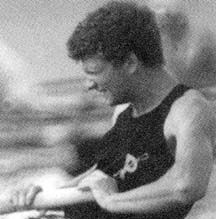 The Loyola Crew team has known great success during its 16 years of existence. Such success would not have been possible without the daring and ingenuity of Edward Fitzsimmons "Fitz" Dunne, who, before launching a distinguished collegiate career, founded the Loyola Academy Crew team. In the mid-80's, Fitz was single-handedly responsible for organizing Loyola's pioneer team -- recruiting its first members, finding a coach, managing its downtown practice sessions. Remarkably, he led the club, in just its second year of competition, to the 1986 Midwest High School championship. He returned to Loyola in 1991, his collegiate career ended, to coach the team he had created and nurtured. The interim years (1986-1990) were nothing short of magnificent. Enrolling at the University of Wisconsin, Fitz posted Jordanesque numbers: among others, three consecutive years of undefeated match races, three consecutive years as runner-up in the IRA (Intercollegiate Racing Association) championships, three consecutive Gold Medalist Midwest championships, third in the Royal Henley Regatta (England), first in the Collegiate National Pair Championships, IRA Gold Medalist, and as stroke (the crew's number-one rower) the 1990 Collegiate National Gold medalist on Wisconsin's championship team.
Back