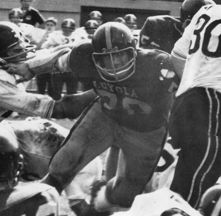 It would be a baptism by fire for an impressive but as yet untested sophomore. His first start would come on the turf of Soldier Field with the Catholic League title hanging in the balance. Forty years ago, young William J. Dunn lined up for the first time as a varsity tackle, pressed into service for one of the storied teams in Rambler football history. He never looked back, playing nearly every down during the next two years before closing a sterling prep career in fitting fashion, once again in Soldier Field with yet another Catholic League championship on the line during the golden era of Loyola Academy football. A tireless and tenacious presence on both sides of the ball, Bill proved a two-way pillar of strength in the interior. Big and strong but generally undersized when pitted against Catholic League behemoths, the All-State tackle held his own and then some at both offensive and defensive tackle, relying on superior quickness, a keen intelligence, and unrivalled technique as well as a persistent unwillingness to lose any battle in the trenches. A student of the game, he prepared for each contest with a careful analysis of his opponents, searching for any weakness to exploit. Above all, it was an unmatched toughness, both physical and mental, that usually provided him the necessary edge. Committed, disciplined, and driven by a fervent desire to succeed, Bill was a team player first and foremost. His quiet leadership, grounded in an ethos of unrelenting hard work in both practice and in games, earned him the title of co-captain his senior year. A three-year letterman, Bill was named the Most Valuable Defensive Lineman for the Ramblers after his final campaign, followed by his selection to the All-Catholic League First Team on defense. He capped a brilliant career with selection to the All-Area (Special Mention) and All-State (Honorable Mention) teams of 1971. Thereafter, Bill earned a full scholarship to the University of Minnesota, where he played two seasons at offensive guard for the Golden Gophers to end his playing days.
Back