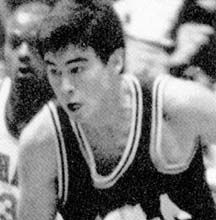 A skilled rebounder and scorer, a fierce and aggressive competitor, a team player and leader, Richard L. Stejskal was the driving force behind the Ramblers back-to-back 20 win seasons in 1986 and 1987. As a three-year varsity starter at small forward, Rich was a model of durability, never missing a game in regular or post-season play. Combining talent, heart, and an unyielding desire to win, the 6' 4" Stejskal became the ultimate team leader. His final two campaigns clearly established his Hall of Fame credentials. In his junior season, he took the Ramblers to the 1986 IHSA Regional title while leading the squad in both scoring and rebounding. Along the way, he was named to the All-Tournament teams at the Niles West and Kankakee Holiday tournaments. Selections to the All-Catholic League and Pioneer Press All-Area teams followed. His stellar all-around play continued in his senior year as he once again led Loyola in scoring and rebounding, and repeated as an All-Tournament pick at Niles West and Kankakee. Season's end brought acclaim for his brilliant play. He was voted Loyola Most Valuable Player by his teammates, and then repeated as a selection to the All-Catholic League and Pioneer Press All-Area teams. He capped his career with selection to the Sun-Times All-Area team. Upon graduation from Loyola, Rich took his game and a scholarship to the University of Wisconsin (Milwaukee). There he played three seasons of Division I basketball, earning a starting position his last two while pursuing his degree in economics.
Back