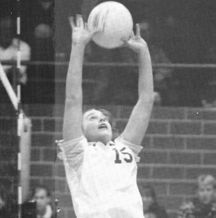 A fiery and feisty floor general whose goal was not just victory but perfection, Jennifer R. Mengelt set a rigorous standard for herself, her team, and the nascent Loyola women's volleyball program. In a game in which height is paramount, she countered a lack of size with intelligence and hard work. As the setter, she was the coach on the court, barking orders, calling what play to run and when, setting to the hot hand, brilliantly and authoritatively commanding the troops. Jennifer's defense game was superb Ð one part athleticism, one part technique, and one part relentless hustle. Her ability to dig difficult balls was peerless, and she remains the all-time dig leader in Loyola women's volleyball history. Her lethal service game was marked by power and strategic brilliance, and she still holds the Loyola record for aces in a season. Jennifer essentially wrote the Loyola women's volleyball record book as the program was building its tradition from the ground up. She was its most accomplished pioneer and is the first women's volleyball player to be inducted into the Hall of Fame. She brings a glittering resume with her. She earned three straight GCAC First Team All-Conference selections as well as two Loyola MVP awards. She earned three successive Pioneer Press First Team All-Area selections, the first player ever to do so. After her final season, Jennifer garnered All-State Honorable Mention to cap a career of impressive achievement. In addition to volleyball, she saw great success on the lacrosse field, playing in two state championships, making two Illinois State All-Star teams, and serving as co-captain of both Loyola and Team Illinois in her senior year. Jennifer earned two varsity letters at Loyola College of Maryland before transferring to familiar family ground at Auburn University, graduating with a Bachelor of Arts in liberal arts and mass communication in 2003.
Back