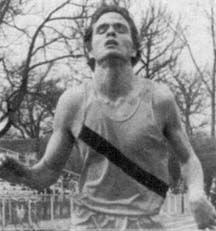 To have seen Barry J. Sullivan in full flight made apt the description that he was born to run. A four-year varsity letterman, Barry produced a career that ranks him among the finest in Loyola's great tradition of middle-distance runners. At 6' 3" and 150 pounds as a freshman, Barry looked more the basketball prospect than middle-distance man. His 2:01 half-mile and 4:46 mile indicated otherwise. His 5th in the Catholic League 880 yards helped Loyola grab the outdoor championship. A solid sophomore season prepared the way for one of the great junior seasons in Loyola history, and the promise of that freshman season was fulfilled. In the mile, Barry claimed the Chicago Catholic League crown with a sizzling time of 4:23.9, a performance which ranks among the top five times in Academy history. Having broken the two minute barrier seven times already that season and having placed a close second at the Catholic League meet, Barry captured the IHSA District title in stunning fashion. His time of 1:55.9 remains a school best twenty-five years later, and sent him on to the State meet and a tenth place in its finals, earning him All-State honors. Barry's senior season was no less distinguished, where as captain he culminated a distinguished career by taking Catholic League championships in the half-mile and again in the mile, bringing to four his career post-season titles and meriting him both the team's MVP and the Chicago Catholic Leagues Lawless Award as its most valuable runner. In his career, Barry ran the half-mile under 2:00 nineteen times and ran the mile under 4:30 seven times, remarkable achievements for a remarkable runner. Barry turned down an Air Force Academy appointment and a track scholarship to Northwestern University, opting instead to attend Northwestern on a Naval scholarship. His degree in Nuclear engineering brought him to the Navy's Nuclear Propulsion Program. Following a run for the U.S. Congress, he went to work for the Department of Energy in Maryland.
Back