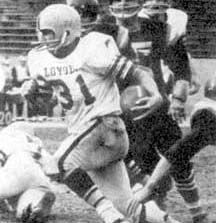 A vital starter on both offense and defense, and an explosive return man on kick-offs and punts, the indispensable John A. Dore was seldom off the field. Owner of a potent combination of speed and aggressiveness, he was the consummate all-around football player, excelling in all aspects of the game. John earned three varsity football letters, beginning as a sophomore on the 1966 Chicago Prep Bowl titlists and concluding as the senior tri-captain on the 1968 Catholic League North Section champions. His brilliance in a variety of roles made him an essential component on three Rambler teams that went 27-4-1. He parlayed a sprinter's swiftness, an acute game intelligence, and a single-minded desire to win into a sterling career. From his safety position on defense he was a leader in interceptions and tackles, including a team-high five interceptions during the 1967 season. In the offensive backfield his superb blocking and sure-handed receiving complemented the record-setting exploits of backfield mate Jack Spellman (Hall of Fame, 1985). His work on special teams returning punts and kickoffs was equally valuable, highlighted by his 103-yard punt return in the 1967 Gordon game as his 77 yard punt return during a three-touchdown effort in the 1968 St. Rita game. John was selected to the All-Catholic League First Team and the Chicago Tribune All-Area team as a safety. His superb athleticism was not confined to the gridiron. On the track, he excelled as the star sprinter and relay man, and still holds the now-retired school record in the 60-yard dash (all events converted to metric in the late 70's). A three-sport letterman, John captained the lightweight basketball team his junior year. Upon graduation from Loyola, John took his game to Yale University, where he earned two varsity letters. There he also took up rugby, serving as captain of the club his senior season. John received a B.A. from Yale and an M.B.A. from Northwestern University's Kellogg School.
Back