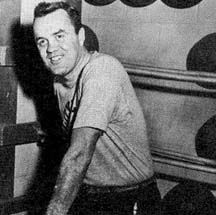 There was laughter in the room that night. And admiration. And respect. And love. A few tears, too. When former players, fellow coaches, friends, and family gathered last October to celebrate the life and times of Eugene P. Sullivan, the great room buzzed with memory, the drinks flowed, the stories unreeled. Just like Gene wanted it. A room -- or a gym -- filled with joyous life. Little could these men and women who had come that night to say thanks have imagined that they were also saying goodbye. Gene Sullivan has been a mover and shaker on the Chicago and national sporting scene for over forty years. It began in 1957 when, after service in Korea, he joined the Loyola Academy faculty as the school was moving from the University campus to Wilmette. Over the next ten years Sullivan served as a teacher, coach and athletic director, laying the foundation for the Academy's renewed athletic success. As head basketball coach he compiled an overall record of 295 wins and 148 losses. Included were three Catholic League championships. As athletic director, Sullivan helped build the Academy's athletic program into one of the nation's finest. After leaving Loyola, Sullivan went on to a distinguished twenty-year career as a college coach and athletic director at Notre Dame, DePaul and Loyola. He helped revive stagnant basketball programs at all three universities and return them to national prominence. Highlights included coaching the high-powered double-stack offense with Austin Carr at Notre Dame, directing the rise of Ray Meyer's DePaul teams to national prominence in the mid-70's, and bringing Loyola to an improbably Cinderella Sweet 16 birth in the 1985 NCAA Tournament. He twice took on the NCAA establishment and, improbably, was twice successful, creating the Sullivan Rule in the process. After his stint at Loyola University, where he was the two-time MCC Coach of the Year, Gene served as Deputy Superintendent of the Chicago Park District for four years and later ran former player Dick Devine's successful, and improbable, run for State's Attorney. He is a member of several Halls of Fame, including those of the Illinois High School Association, the Chicago Catholic League, the Chicagoland Sports Association, Schurz High School, Loyola University, and DePaul University, and in 1998, Loyola Academy. He is also the recipient of a prestigious Honorary Monogram from the University of Notre Dame. One writer noted at his death that Gene "loved longshots and little guys. He delighted in bringing big shots and stuffed shirts to their knees." He got it right. That was Gene. The writer continued that "to label him merely as a coach doesn't begin to do justice to the life-long Chicagoan's life." That point is dead wrong. In whatever he did, Gene was always a coach. That was everything, and enough.
Back