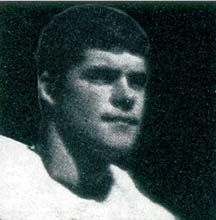 Scholarly, unassuming, and driven, Philip G. Sunderland emerged in the fall of 1962 as one of the state's preeminent linemen and one of the most celebrated players in Loyola's football history. A superb two-sport athlete, Phil excelled on the baseball field (co-captain, All-League, All-American), but he truly thrived on the gridiron. His brilliant line play in his final campaign brought a flurry of honors at season's end. First, the senior co-captain garnered All-Catholic League, All-Area, and All-State recognition. Then, in honor of his athleticism, scholarship, and sportsmanship, he was named the recipient of Loyola's coveted Skoglund Award, the winner of the Notre Dame Club of Chicago's Knute Rockne Award, and the honoree of the University of Michigan Club of Chicago's Fritz Crisler Award. In effect, Phil's 1962 season was nothing short of monumental. Phil furthered his portrait as a student-athlete at Dartmouth College, where he was named the Most Outstanding Freshman in his class and later, All-Ivy League. On the heels of a Bachelor of Arts from Dartmouth, he entered Stanford Law School, graduating in 1972.
Back