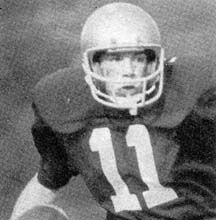 Robert J. Dooley clearly ranks among the finest defensive backs in Loyola Academy football history.    Possessing a lethal combination of speed and aggression, Rob's list of achievements speaks for itself. He led the Catholic League in interceptions during both his junior and senior seasons. He was twice selected to the Catholic League North All-Star team. He was also twice named to the Pioneer Press All-Area team.     Rob was an Honorable Mention All-State selection as a junior and Special Mention All-State as a senior. After his brilliant senior season, he was a unanimous selection to the All-Catholic League team and was named to the Chicago Tribune All-Star team. Capping off a distinguished career, Rob was chosen captain of the Catholic League All-Star team in its game against the Public League All-Star team. He was captain of his team his senior year and received the McCammiskey Award as most valuable player. An all-around athlete, Rob was the back-up quarterback and a starter in basketball.    A top student and National Merit semi-finalist, Rob went on to Yale after graduation, and continued to excel as a four-year starter in the defensive backfield. He led Yale in interceptions, forced fumbles, and passes defended all four years. In 1982, he was named to the Ivy League All-Newcomer Team, and in 1982 and 1983, he received Honorable Mention in the All-Ivy League Team. In 1984, Rob received second team All-Ivy League Honors and he was an Honorable Mention Academic All-American in his senior year. He also received the prestigious Anderson Award for leadership and excellence in his senior year at Yale. Following his outstanding college football career, Rob received a tryout with the Miami Dolphins.
Back