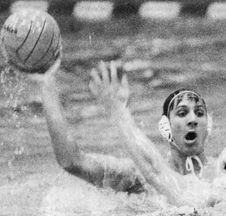 In the sport of water polo, the most critical offensive player in the pool is called the "two-meter man," or the "hole man." His is the most physically demanding position in the game, for the offensive attack revolves around him, and the defense, knowing this, conspires to disrupt him by any means necessary. His job is to set himself between two and four meters from the opponent's goal and to maintain that position, from which he scores, passes, and absorbs fouls. He is point-guard, shooting forward, and high-post man all rolled into one. He provides structure, creates movement, and produces opportunity. The good ones can dominate the game, and one of the most dominating two-meter men in the history of the Catholic League played for Loyola in the mid-80s. His name was Thomas N. Tomsheck. Long and lanky as a 6'0 freshman, Tom put on muscle and strength as he grew to a broad-shouldered 6'3 by the time he earned his third varsity letter as a senior. Combining advantageous height and wingspan with a keen understanding of the game, he controlled the flow of the offense like few others could. He brought a team-oriented approach to the pool, patiently working to get his teammates engaged yet grabbing the opportune moment to take over games. By the time he ended his playing days at Loyola, he had become a one-man wrecking crew in Illinois water polo, leading the Ramblers in goals and assists and earning selection to the All-State First team in both 1985 and 1986. After graduation from Loyola, Tom attended the United States Naval Academy, where he earned four varsity letters in a brilliant collegiate career. Named to the All-East Second Team in 1988 as a sophomore, he was selected to the All-East First Team in both 1989 and 1990 after leading the Midshipmen in goals and assists. Tom tried out for and was chosen to participate in the U.S. Olympic Festival in 1990, 1991, and 1992, thereafter capping his collegiate athletic experience with his induction into the U.S. Naval Academy Hall of Fame. Upon earning his Bachelor of Science degree in 1990, Tom served a four-year stint in the Navy as a surface warfare officer.
Back