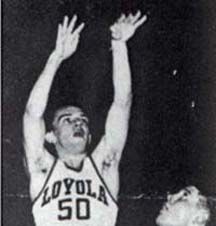 Dick Devine was the ultimate team leader, and remains one of a select few who have captained both the basketball and football teams at Loyola Academy. In basketball Dick was a three year starter on the lights and was named All-Catholic in both his junior and senior years. In his junior year (1960) the Ramblers lost a last-second one point game for the league championship, making amends by winning it all in 1961 with a record of 22-2. In football he played varsity three years. As captain and starting fullback his senior year, the Ramblers were undefeated until he separated his shoulder in the fifth game. He demonstrated his leadership when, despite missing five games, he was selected to receive the highly prestigious Skoglund Award. He was a starter on John Carroll's freshman football team before transferring to Loyola University. Dick is an honor graduate of both Loyola University and Northwestern's Law School. He has been a successful lawyer in private practice with a number of prominent law firms but has always answered the call to public service and has served in numerous capacities.
Back