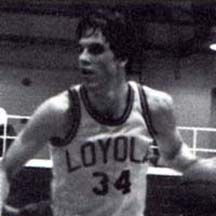 From the time he first took the court for Loyola to the time he walked off the court at South Florida, Tommy Tonelli has given ample definition to the meaning of "team player." Tommy was a two-year varsity letterman at Loyola. During his senior year, he co-captained Loyola to one of its most successful seasons ever, 22 and 6. Tommy was named All-Catholic League and Honorable Mention All-State. The ultimate teammate who made all those around him better, Tommy set both single season and career records for assists. Tommy went on to play at the University of South Florida where he flourished. He was team captain from 1984-1986 and he continued his record-setting ways as he became USF's single season assists leader, single season steals leader, and career assists leader. Additionally in 1986, Tommy won the Sun Belt Conference's prestigious Jerry D. Young Memorial Award for academics, leadership, sportsmanship, and athletic ability. He was also a two-time GTE District III Academic All-American and was twice named Academic All-Sun Belt Conference. After graduation, Tommy remained at USF as an assistant coach. In 1998, he moved on to become head coach at Wharton High School where he compiled a 21-8 record and won Coach of the Year honors.
Back