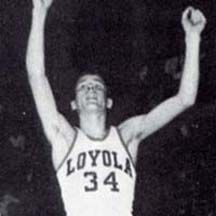 A three-sport letterman at Loyola in basketball, baseball, and track, Jack Wambach excelled on the basketball court and ended his career as one of Loyola's greatest players on one of its greatest teams. In his junior 1960-61 season, despite playing with a cast to protect a broken arm, the forward led the Ramblers to the prestigious DePaul Tournament Championship, and to the semi-finals of the Catholic League and an overall record of 20-4. The following year, with Jack as co-captain, the Ramblers again won the DePaul Tournament and Jack was named All-Tournament. With only one pre-season loss, the Ramblers went on to an undefeated season in the Catholic League and for the first time in history, a number one ranking in the Chicago area by the Tribune, only to be upset in the Catholic League championship game by the Gordon Tech team they had twice previously defeated. Jack was voted All-Catholic League and All-Chicago Area. The Ramblers team record in Jack's two varsity season's ranks with the best in Loyola's history. Jack attended Xavier University and was a varsity team member for three years, two as a starter. His leaping ability and aggressiveness made him an exceptional college player. Upon graduation, Jack entered the business world. Tragically, Jack was struck and killed by an automobile in 1977 at the young age of 33. He is survived by his wife, Nancy, and their four children.
Back