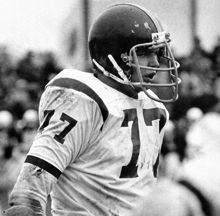 Selfless, reliable, and resolute, Michael R. Denten was a stalwart in the trenches, operating from his offensive tackle position to spearhead Loyola's prodigious ground game. At 6'2", 225, he led the Rambler's front five with strength, quickness, intelligence, and a relentless desire to finish the task at hand. Sportswriter Taylor Bell named him one of the top linemen in the Chicagoland area, and for good reason. A brilliant one-on-one blocker, Mike played a game well-suited to Loyola's option offense. His ability to read defenses and make appropriate adjustments, especially in sealing off linebacker pursuit or preventing leakage from the backside, was critical to the success of the Ramblers' option attack. He brought a lunch-bucket mentality to the battle at the point of attack, combining his power and agility with a stubborn refusal to lose any match-up. Mike was honored with post-season recognition, including selection to the All-Catholic League First Team, the Pioneer Press All-Area First team, the Chicago Tribune All-Star team, and the All-State (Honorable Mention) team. Upon graduation from Loyola, Mike accepted a scholarship to play at the University of Tulsa, where he enjoyed a four-year career on the offensive line under coaches F.A. Dry and John Cooper. He earned his degree in business administration from Tulsa in 1978.
Back