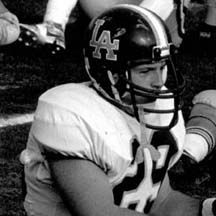 The Athletic Hall of Fame is a celebration of the rare those select few among the many who are worthy of honor in their respective sports. Rarer still is the athlete truly and equally worthy of honor in two sports. Such a rarity is Desmond P. Werthman. His accomplishments on the football field and in the throwing ring together place him among the elite two-sport athletes in Loyola history. An athlete of awesome strength and fierce determination, Des physically dominated each competition arena, becoming the master of both. Rugged and resolved, the co-captain of the Loyola football team, led the Ramblers to the 1988 Prep Bowl Championship victory. Post-season honors included selection to the All-Catholic League and All-Area squads. As a three-year letter winner in track and field, Des teamed with fellow inductee John Zera to form the most formidable duo in Loyola track and field history. Indoors, he set the Highland Park Fieldhouse record with a toss of 56'6", and followed with an astonishing Loyola indoor record of 58'10", set at the Evanston Fieldhouse. Outdoors, after a second to teammate Zera in the Catholic League meet, Des followed with another second at Sectionals (he was champion as a junior). In the State final, Loyola's co-MVP climaxed his career with a sixth place finish and a place on the All-State team.. Upon graduation from Loyola, Des went on to Columbia University, when his development a football player was truly remarkable. After a freshman team MVP season in which he was Ivy League Freshman of the Year runner-up (to Jay Fieldler, NFL quarterback), Des launched an extraordinary three-year varsity career. As a dominating interior lineblocker, Des set a single-season school record for tackles at 184, which ranked him second nationally. He still holds the Columbia University career record for tackles with 449. He was twice named MVP of his Columbia team, and was a two-time Ivy League MVP runner-up. After both his junior and senior seasons he was named to the First Team All-Ivy League and All-East Teams. He capped his remarkable collegiate career with selections to the All-American team and the news that he has received votes in the Heisman Trophy balloting (Loyola's only Heisman vote-getter). Perhaps the ultimate honor came in 2000 when Des was named to Columbia University's Team of the Century.
Back