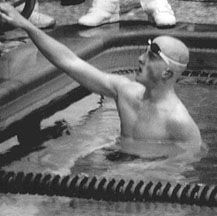 In the long and proud history of Loyola Academy swimming, few young men have known the upper echelons of the sport as intimately as has Ryan E. Kehoe. In three seasons between 1992 and 1994, Ryan competed nine times in the finals of the Illinois State Swimming Championships, and came away all nine times with All-State honors. Among the most decorated athletes in Loyola swimming legend, he also proved to be one of its most selfless, forsaking individual glory for the sake of his team. In his wake he left a string of records and titles as well as a hard-earned reputation as one of the three or four greatest sprinters to ever grace Loyola's pool. A disciplined, dedicated athlete, Ryan spent countless hours of preparation focusing wholly on the state meet. Though lacking the classic sprinter's body, Ryan was blessed with pure speed and a gritty determination to win. In his mind, team goals took precedence over individual ones: though his prospects for a run at an individual title in the 100 freestyle were promising, he refused to give up his beloved relays to pursue that end. He would swim the maximum four events, and let the chips fall where they may. His record of accomplishment is lengthy and indeed impressive. After earning a varsity letter and state qualification in two relays as a freshman, Ryan was ready to begin a remarkable three-year run. As an individual, he qualified for the state finals four times in the 50-yard and 100-yard freestyle, claiming a sectional title in the process. In 1993, as a junior, he finished ninth in the 100-yard final, earning his first All-State honors in an individual sprint. He topped that in his senior year by placing fourth in the 1994 100-yard final and again earning All-State honors. His time of 47.39 in that race still ranks as the third fastest time in school history. In the relays, Kehoe anchored teams garnered seven All-State selections, two All-American selections, and two school records between 1992 and 1994, not to mention seven sectional titles. The seven All-State relay teams included two 3rd places, two 5th places, two 6th places, and an 11th place. In 1992, Ryan led the 3rd place 200-yard freestyle relay team to a new school record of 1:26.27, a mark which stood for twelve years, and in 1994, his 3rd place 200-yard medley relay team set a new record of 1:38.02. In 1994, the National Interscholastic Swimming Coaches Association named Ryan to the prestigious Top 16 list in the 100-yard freestyle and in his three relays. In addition, he qualified for the 1994 Junior Nationals in both the short and long course competitions. Between 1992 and 1994, Ryan led the Ramblers to three straight sectional titles, followed by IHSA state meet finishes of 10th, 15th, and 6th, respectively. He was twice named Loyola's Most Valuable Swimmer (1993, 1994) and captained the team his senior year. After Loyola, Ryan swam to four varsity letters at Boston College, where he earned his B.A. in history in 1998.
Back