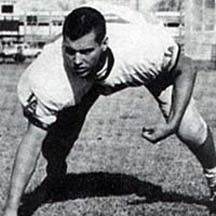 One of the finest linebackers ever to play for Loyola, Bob Weskamp was also one of its fiercest competitors. Big, strong, quick, and agile, Bob dominated opponents with his play inside and outside the tackles. For two seasons, 1962 and 1963, Bob and Hall of Famer Steve Quinn formed the core of Loyola's version of the Steel Curtain. At linebacker in his senior year, Bob anchored a defense which gave up only 44 points in ten games. A two-way starter, he also played superbly on the offensive line as a guard. He helped mold the 1963 team into one of the best teams ever produced at Loyola, a team which went undefeated until the Catholic League Championship game, when a two point conversion gave St. Rita, ranked number one in the nation, a 16-15 victory. At season's end, recognition for Bob's outstanding play poured in, as he was named to the All-Catholic League, All-State and New World All-American teams. Bob was also an outstanding wrestler and won the Catholic League 175-pound title. Bob went on to Purdue University, where he played linebacker all four years. He was a member of the 1967 Rose Bowl team. Bob founded his own company, Wes-Tech, Inc. While establishing his own company, he took time to coach football at St. Mary's in Buffalo Grove and at Carmel High School.
Back