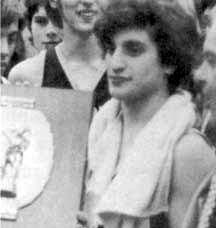 Possessing dazzling quickness of hand and foot, Mark Daniel was the consummate floor general. A devastating defensive and a penetrating passing guard, his role was that of leading character on a team of characters that made its way to the Elite Eight and a place among the great teams in Loyola basketball history. A defensive artist with exceptional quickness, anticipation, and understanding of the game, Mark harassed opposing guards, clogged passing lanes, and generally wreaked havoc on opponent's offensive game plans. Though he was not looked to as a scorer on the offensive end, his 56 percent field goal percentage was testimony to his many steals that led to lay-ups. His primary offensive role was to play point guard and set up his talented teammates. His task was to do the dirty work, not the glory work. It was no coincidence that the teams that Mark quarterbacked were winners. He led his St. Ignatius grammar school team to a 32-3 record, then led his Loyola sophomore team to a Catholic League title. His transition to the varsity was predictably smooth as he enjoyed an MVP season his junior year. The culmination of Mark's career as floor leader non pareil occurred in the blistering post-season run of the 1975-76 team which he captained. Loyola swept through the State series, garnering the school's first Regional, Sectional, and Super-Sectional titles along the way and earning the honor of being the first Catholic League team to play downstate. A definitive moment of that historic run was Mark Daniel's crucial steal and basket late in its Sectional final against Crystal Lake. That basket extended the Rambler lead, a lead they would not relinquish. Recognition for Mark's pivotal role in the team's spectacular season came in the form of All-League and All-Area honors, as well as the team's Coaches' Award. After graduation from Loyola, Mark attended DePaul University and graduated with a degree in accounting.
Back