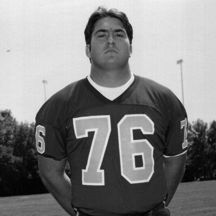 One of the strongest athletes ever to take the field for Loyola Academy, Jovan Ilich left his mark as a premiere performer in both football and track and field. His physical attributes were indeed impressive. At 6'2", 265, he was a massive presence on the offensive line and in the throwing rings. His prodigious strength helped him set records in Loyola's weight roomÑhe held the highest total in Loyola history as a member of the "1000 Pound Club" and carried over to the playing fields, where he imposed his will on the opposition. However, it was not sheer strength alone that set Jovan apart from the competition. He was a study in the intangibles selfless commitment, an unrivaled work ethic, a devotion to fundamentals, an unwillingness to quit, a practiced relentlessness. A two-year starter on the offensive line, first at tackle and then at guard, Jovan proved himself as tough a run blocker as any who wore the maroon and gold. Extremely quick and agile for a player of his size, he was a fearsome sight as a pulling guard leading the point of attack. A running back's best friend, he was instrumental to fellow inductee Pat Naughton's 2000-yard season as he co-captained the Ramblers to a 10-3 season and a Prep Bowl title in 1995. Post- season recognition followed with his second All-Catholic selection as well as a Pioneer Press All-Area Special Mention. Jovan's exploits in the shot and discus ring proved no less noteworthy. He earned four major letters, two All-Catholic selections and an All-Sectional honor, and three trips to the state meet. Incredible strength and quickness blended with precise technique and form produced an armload of titles. He threw the shot over 50' a remarkable 21 times in his career. Jovan's peak performance came at the state sectional in his senior campaign, when he captured sectional titles in the shot put, with a toss of 54'51Ú2," and in the discus, with a throw of 178'8," a new school and sectional record.
Back