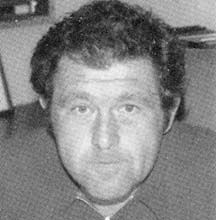 For seventeen years, first as a coach and then as athletic director, Frederick M. Wright made a significant and lasting impact on Loyola athletics and the Chicago Catholic League.    Fred was an accomplished wrestler at Cornell College, compiling a record of 63 wins and 3 losses. Concluding his own career as a finalist at the 1960 U.S. Olympic Trials, Fred turned his talents to shaping the careers of young wrestlers. After starting wrestling programs at two Iowa high schools and reviving a dormant program at another, Fred came to Loyola in 1964 to coach wrestling and football and to teach economics, sociology, and physical education. His ten years as head wrestling coach produced an outstanding record of 129-56-11. He coached three future Hall of Famers (Spellman, Fear, and Powers), and initiated and organized the National Catholic Wrestling championships, held at Loyola in 1969 and 1970.     Later in 1969, Fred was appointed athletic director. During his thirteen-year tenure, his accomplishments were many. He initiated several new sports and added levels within existing sports. He developed new playing facilities and upgraded existing ones. In 1971, Fred became the first layman to serve on the Catholic League Board of Control. He served as president of the Board from 1973-1978. During his tenure as president, he initiated, along with Fr. James Arimond, S.J., the move of the Catholic League into the IHSA in 1975. Fred was the first two-term president of the Illinois Athletic Directors' Association and was named the association's Athletic Director of the Year in 1981.    Fred left Loyola in 1981 to become vice-president of Scholastic Transit (later Ryder Transportation).
Back