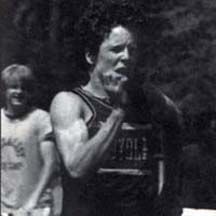 Spencer Cotten was an elite track athlete, certainly one of the greatest Loyola sprinters. Though he achieved success as an individual, he was a great team man, who often sacrificed to help his teammates achieve success on relays. As a freshman, Spencer qualified for the state meet as the anchor (50.0) of the 1600 meter relay team that finished 12th in the state (3:25.1). As a sophomore, he won the Sectional title in the 100 meters (10.8), and anchored the 400 meter relay (43.3) and 800 meter relay (1:29.3) teams to Sectional crowns. He advanced to the 100 meter semi-finals and took the 800 meter relay team to 11th in the state. In his junior year Spencer qualified for the state meet in four events. At the state sectional, he won the 100M dash, and was a member of the 400M relay, 800M relay and 1600 M relay teams. In the 100M dash semi-finals in the state meet, Spencer broke the state record with 10.31. He finished 3rd in the state finals, and ran on the 400M relay (10th), 800M relay (11th), and 1600 M relay (12th) teams. He was named All-State in track as junior. Spencer Cotton's senior year was to be a year of great expectations, but unfortunately he did not recover from a broken bone in his foot. As an individual and relay runner, he owned or shared in fifteen championships in Catholic League and state competition during his remarkable career.
Back