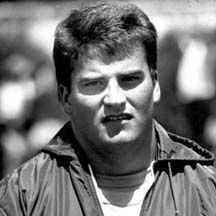 Disciplined and goal-driven, an athlete whose calm demeanor belied a driving intensity to succeed, shot putter John D. Zera fashioned one of the great championship seasons in Loyola track and field history, and in doing so, established himself as its greatest shot-putter. After fine sophomore and junior seasons in which he twice finished third in the Catholic League outdoor meet, John commenced an extraordinary senior campaign. Pushed and prodded in practice and meets by his friend and rival, fellow inductee Des Werthman, he enjoyed a superb indoor and outdoor regular season. With a technique grounded on great leg strength and a smooth, quick delivery, John now attacked the big post-season events with a passion, and was little short of remarkable in doing so. He took the outdoor Catholic League title with a put of 58'10", followed by a Sectional title with a school record throw of 59'4.5". His fourth place finish in the State final, the highest Loyola finish ever at state, brought All-State recognition and a co-MWP award. John's success in track, coupled with his success in football as a member of the 1988 Prep Bowl Champs and his selection to the All-Area team, had made for a memorable finish to his high school career. At Miami (Ohio) University, John continued to pursue his throwing career, adding the hammer and the 35-pound weight throws to his repertoire. In 1990, he qualified for the USATF Junior National in the hammer throw. In 1992 and again in 1993, John was an NCAA Provisional qualifier in the 35-pound weight throw. He continued to excel in the shot put, capturing the Mid-American Conference title in 1993. John graduated as the Miami University record-holder in the 35-pound weight throw, and ranked third on the all-time list in the hammer throw, and eighth in the shot put. A successful post collegiate career was highlighted by his participation in the 1996 United States Olympic Trials in the hammer throw (18th place), the 1996 USATF Indoor Championship in the 35lb. weight throw (6th place), and the 1996 and 1997 USATF Outdoor Championship in both events. John earned a BA in English Literature and a BA in English Creative Writing from Miami (Ohio) University in 1993, and an MS in Exercise and Health Studies from Miami in 1998.
Back