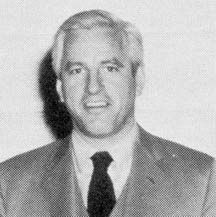 One of the most successful programs in the history of Illinois hockey began with twenty or so young men skating around on open-air rink in Oak Park at five-thirty on a cold winter dawn. Looking on in the crisp, morning air was a man who knew the game and cared about the way it was played. In 1965, when Daniel T. Corns was asked by student Brian McIntyre (Hall of Fame, 1999) and the late Gene Sullivan (Hall of Fame, 1998) to take control of the Rambler's first hockey team, perhaps only he could envision the legacy of accomplishment that would lie ahead. Dan Corns held the reins of Loyola hockey for eight seasons, from 1965 through 1973, and his steady professionalism and complete knowledge of the game laid the foundation for the success that was to follow. Emphasizing a finesse game of speed and precision, Dan's disciplined, well-drilled teams claimed Loyola's first Catholic League hockey championship in 1969-70 (Hall of Fame Team, 1999), finished second five times, and third twice -- eight top three teams in as many years. He coached two league MVP's -- Mike Leary and Tom Machowski (Hall of Fame, 2000) - and one Most Valuable Defenseman (son Dan Corns, Jr.). Machowski became the first Illinois-born player to receive a full hockey scholarship to a Division I school (Wisconsin) and subsequently be drafted by an NHL team. The Loyola icemen were on the map. In eight short years, Dan Corns had created a new power in Illinois hockey, and had built a program that was both respected and feared. The time and energy he devoted to the development of Loyola hockey and its young men, with little or no recompense, was immeasurable. Dan graduated from New Trier in 1948 and moved on to Colgate University on an athletic scholarship, playing football and hockey. In 1964, he began a thirty-year tenure as associate publisher of Motor Trend magazine, retiring in 1993 to become a consultant. His involvement in Illinois youth hockey began in 1955 and lasted until his transfer to California in 1973. From 1960 to 1974, he served on the Board of Directors of USA Hockey, the governing body of the U.S. Olympic Committee and responsible for selecting the Olympic team. He served as National Tournament chairman from 1968 to 1974.
Back