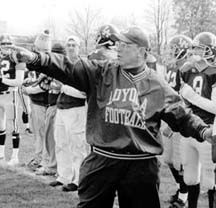 Just outside the doors of the Loyola Academy chapel hangs a portrait of St. Ignatius, a fellow soldier who transformed his life and changed the world. In front of that portrait, each and every morning, stood John E. Hoerster, greeting students and faculty with a massive smile, a high-pitched bark of a hello, and a handshake that one didn't soon forget. And now there is an eerie emptiness in the crowded hallway, the packed stadium, in all of us who knew him, worked alongside him, loved him. A man of character and integrity, he asked the same of the young people whom he was honored to guide. Driven and demanding, electric with an energy that lifted and inspired, John E. Hoerster resurrected Loyola's moribund football program, guiding his men to a state championship title, a state final, and two state semi-finals during an unprecedented four-year run. With his trademark enthusiasm, commitment, and good humor, he likewise invigorated Loyola's athletic directorship. John lived and breathed football. His knowledge of the game, his sure command of the X's and O's, was absolute and complete. A master of defensive football, John understood that a disciplined, aggressive, meticulously prepared defense would keep Loyola in contention in any game. The thoroughness of his game preparation was unrivaled, his ability to break down film legendary. Nothing was taken for granted. Yet he proved equally adept at making mid-game adjustments on the field. He was, above all, an inspiring teacher of football whose passion for the game was a lesson in itself. John's record of accomplishment is long and impressive. He was an All-State, All-American offensive lineman at St. Rita and an award-winning, three-year starting guard at Northwestern. After fifteen seasons as an assistant coach to mentor Tom Winiecki at Gordon Tech, John came to Loyola. In his sixteen seasons at the helm, he led the Ramblers to 133 wins against 57 losses, a seventy percent winning record. A state title (1993), a state finalist (1992), two state semi-finalists (1990, 1991), four Catholic League North Section titles (1989, 1991, 1992, 1993), three Prep Bowl titles (1988,1995,1996), and twelve playoff qualifying teams the list is indeed an impressive chronicle of achievement. Named the Chicago Catholic League's Man of the Year in 1990, the Catholic League Coach of the Year in 1991, the Frank Leahy Prep Coach of the Year in 1992, and the National Football Foundation High School Coach of the Year in 1991 and 1992, John fulfilled a dream with his induction into the Catholic League's Hall of Fame in 1993. John wore many hats at Loyola director of admissions, public relations coordinator, director of study skills, director of sports camps, director of financial aid before he was offered in 1999 the position of athletic director. He brought to that role those same qualities that defined him as a coach enthusiasm, diligence, and a caring respect for people. There are people we meet in our lives who by the sheer weight and warmth of their personal vitality leave us better for the meeting. John Hoerster was surely one of those.
Back