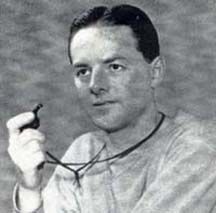 Teacher and coach, mentor and friend, John "Hicks" Connelly was an integral thread in the fabric of Loyola Academy life for more than 50 years. He arrived on the Lake Shore campus in 1940 and left an enduring mark on the lives of Loyola men through the uncertain days of the Second World War. A man of sharp intellect, a twinkling eye, and an ever-present Irish wit, Hicks was a living link between the old Loyola of Dumbach Hall and the new Loyola of Wilmette. His death in December 2001 at 96 marked the passing of a great and grand Loyola man. Hicks starred in basketball and football at both St. Ignatius High School and Loyola University. In 1940, after a stint at St. Rita, Hicks began his long relationship with Loyola Academy and Loyola University, bringing with him a passion for teaching and coaching young people. He taught mathematics at both the high school and the college level, while also serving as athletic director, and coaching football, baseball, and track. He coached three Hall of Famers at the Academy: Johnny Dee, Bob Skoglund, and Burt Dolan. One former player remembers that "Hicks never had to raise his voice. He never screamed, never swore. In the classroom and on the field, he had our total respect." In 1945, Hicks gave up his successful coaching career to become a full-time professor at Loyola University while continuing to teach Advanced Placement at the Academy. He served many years as chair of the mathematics department and served as chair of the Athletic Board when Loyola won the 1963 National Championship in basketball. Thirty-one years later, Professor Connelly retired from the University. He continued to teach at the Academy and at Niles College for many years. He is a charter member of Loyola University's Athletic Hall of Fame. In 1985, the University awarded him an honorary doctorate for his remarkable work. In 1999, he was inducted into the Loyola Academy Athletic Hall of Fame.
Back