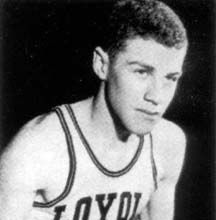 Paul E. Colleran was one of the pivotal players on the fine Loyola teams of the early '60s. Guarding Paul was nothing short of catching lightning in a bottle. An explosive first step left defenders in his wake and recruiters at his doorstep. As a four-year varsity mainstay (Lightweights and Heavyweights combined), Paul carved an impressive niche in Loyola's basketball picture. A slashing point guard, his instincts and peripheral vision baffled opponents. His ability did not go unrecognized as he mustered All-League, All-State, and All-American honors. Not just a one-way player, Paul combined quick hands and feet with a pugnacious temperament to emerge a foremost defender. Accordingly, John Bach, who later would surface as both an NBA assistant and head coach, sold Paul on the merits of Fordham University where, despite nagging injuries, he competed on scholarship for four years of Division I basketball. Intense, self-assured, and gifted, Paul was one of Loyola's most engaging athletes. Moreover, his appointment as Senior Class President attests as much to his moral timber as to his popularity.
Back