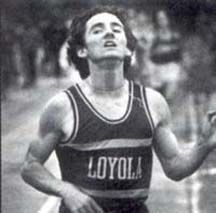 John Clohisy's record clearly argues for his place among Loyola's greatest distance runners. He held many school records in the distance events during his career, and he continues to hold records in the 2 mile indoors (9:36.6) and outdoors (9:19), and the 3200 meters outdoors (9:16.6). Overall, John captured six Chicago Catholic League Championships in track and cross-country. In his junior year, he was the dominant distance runner in the Catholic League, capturing four individual championships -- Cross-Country, indoor 2 mile (9:38.9), outdoor 3200M (9:33.6), outdoor 1600M (4:28). His outstanding performances continued in his senior year. After a second place finish in the league during the fall Cross-Country season, John took the Catholic League 3200 meter indoor championship, then two silver medals in the 1600 and 3200 meters outdoors. Perhaps the greatest single race of his career and one of the best in Loyola's track history occurred at the State Sectional where John finished second in the 3200 meters with a brilliant 9:16.6 time, still a school record. The following week he finished eleventh in the state Finals. John earned his bachelor and medical degrees from Northwestern University after graduation from the Academy.
Back