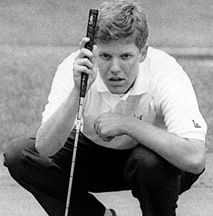 It is the stuff of high school athletic legend and the headline will always read the same seven shots down with 18 to play, J.D. Goering stormed back with a brilliant record-setting 69, claiming an improbable three-shot individual state title and leading Loyola to a convincing state championship crown. A skilled ball-striker and shot maker with a long driver and a streaky putter, Jonathan D. Goering was always good and sometimes great. His golfing virtues a strong all-around game, a stoic temperament, and intelligent course management made for a potent combination when the gods of golf were on his side and the putts were rolling in. His poise and self-possession under pressure served him well when it counted most. In addition to the 1996 individual state title, he was named to the All-Catholic and All-Area teams in 1996 and 1997. He was the CCL runner-up in 1997 and was three times named Chicago Tribune Player of the Week. His All-State performance over the two-days at the 1996 state meet looked more like an All-World performance on the final day. On a cold, windy day at Crestwicke Country Club, an opening day of 80 left J.D. with a seven-shot deficit to the clear leader, Kevin Streelman (now a PGA tour player who just finished third at the Barclays tournament). With Loyola three-shots in the team lead, J.D.'s plan was to play a solid round and bring the team trophy home. His putter had other ideas. After a three-under 33 on the first nine, including a lightning-quick, 60-foot breaking putt and Streelman's 42 on his front nine, J.D. suddenly found himself two shots in the lead with nine to go. Battling the nerves, J.D. knocked in a fifteen-foot birdie on his 17th hole to get back to 3 under. Lying in a fairway bunker on the final hole and with the state medalist trophy on the line, J.D. hit a pure five-iron onto the green and two-putted for a closing 69 and a two-shot victory. It was some of the most compelling theatre in state championship history. J.D.'s final-round 69 was the lowest score ever posted in IHSA tournament play at Crestwicke, and was the third lowest score in state history. Most important to him, the 1996 Ramblers (Hall of Fame, 2010) took the team title by a resounding 13 shots over rival New Trier. Ten days before heading off to play golf at Miami University in Oxford, Ohio, J.D. was diagnosed with Hodgkin's Lymphoma and began six months of chemotherapy. He won that battle, too, and, his cancer in remission, he returned to Miami to pursue his degree and to play collegiate golf. J.D. earned his BA from Miami in 2003.
Back