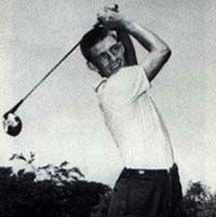 John Cleland became one of the most successful golfers in Loyola Academy history before going on to a fine career as an amateur and a professional. In his four years of golf at the Academy, he led the Ramblers to two Catholic League titles. John captained his team his senior year and was the medalist in the Catholic League Championship, positioning his team for victory. John also had a bright future in basketball, but it was cut short by a knee injury. He did receive the Sportsmanship Award for the DePaul Tournament his senior year. He went on to star in golf at DePaul University where he captained the Demons his senior year. After winning the Cook County Amateur Golf Championship in 1962, he turned professional and followed the sun, playing pro golf for three years before becoming a teaching pro. He returned to Chicago in 1976 and was the head pro at the Exmoor Country club for fifteen years. In 1989 he was named the PGA Professional of the Year. He also is a past president of the Illinois PGA. He somehow found time to also coach DePaul to four golf championships.
Back