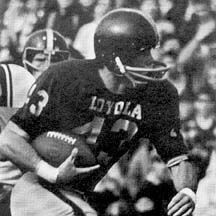 With tremendous speed and elusiveness, J. Timothy Cerney exploded onto the Catholic League scene as the starting junior halfback and return man for one of the legendary Loyola football teams. By the time he finished his senior campaign a year later, he carried an armful of accolades while leaving a string of defenders in his wake. A three-year letterman, Tim emerged as the starting running back for Rambler squads that won nineteen consecutive games. During a perfect 1969 season, he averaged over eight yards per carry for a team destined to capture Catholic League and Prep Bowl titles, the number one ranking in the state, and the number two ranking in the nation. In the season's pivotal game, Tim's 78-yard game-breaking touchdown run against then number one-ranked team in the nation, Catholic League rival Mendel, sealed a 22-6 victory and propelled the Ramblers on their march to perfection. Tim's senior campaign of 1970 was nothing short of brilliant, capped with selections to the All-Catholic League, All-Area, and All-State teams. Four touchdowns in the opening victory over Mt. Carmel were followed by three more in defeat of Fenwick, including an 85-yard return of the opening kickoff and a 79-yard dazzler from scrimmage. A knee injury in that game proved bothersome for the rest of that season, but failed to slow him down. The numbers tell the story. He rushed for nearly 800-yards that season, averaging over eight yards per carry while leading the Ramblers in rushing, receiving, and scoring. He was instant offense, the dominant all-purpose back in the Catholic League, leading the league in scoring (with 18 TDs), scoring by run, pass receptions, kickoff returns, and punt returns. In doing so he tied Loyola records for points scored in a game, rushing touchdowns in a game, and kickoff returns for touchdowns. His return averages were staggering, with 41 yards per kickoff return and 17 yards per punt return. Tim took his game to the University of Iowa on a full scholarship. There he led the freshman team in rushing before a knee injury ended his season. After his sophomore year at safety was cut short by another knee injury, he ended his career. With bachelor's degree in hand, Tim remained at Iowa to pursue his law degree.
Back