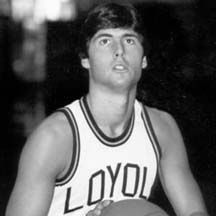 As a junior basketball player, Mike earned All-Catholic League and Kankakee All-Tournament team honors. Matching this performance his senior year, Mike also was named to the Sun Times All-Area squad and was an honorable mention All-State selection. In leading the Catholic League in scoring with a 22.8 average, Mike also set Loyola season records for most field goals (224), most free throw attempts (220), most free throws made (162), and most points scored (610). Mike went on to play for Loyola University Chicago.
Back