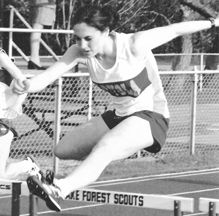 A gritty and self-assured champion who was at her best when the pressure was on, Lauren E. Cerney was the greatest winner in Loyola women's track and field history. In four seasons she delivered an astonishing 115 out of a possible 160 points in GCAC championship competition and led the Ramblers to four straight GCAC titles. A multi-dimensional threat on both the track and the field, Lauren performed with methodical, machine-like precision in her specialties, the hurdles and the jumps. Combining speed, rhythm, and balance, she dominated the GCAC. Though limited by rules to four events per meet, she likely would have excelled at any distance from the 100-meter dash through the mile run. Her defining quality was a disciplined approach to work and the rare ability to concentrate and perform when the spotlight was the brightest. From her sophomore season through her final campaign, she was the supreme track athlete of the GCAC, claiming seven individual titles and one relay crown, boosting her total to eight overall championships in four years. She was the GCAC champion in five different events. Between 1997 and 1999, Lauren established herself as the greatest hurdler in Rambler history as she took three straight 100-meter high hurdles championships while adding two more in the 300-meter hurdles. She still owns the Loyola record in the women's 100-meter high hurdles (15.5 seconds) as well as six indoor records. She remains the greatest long jumper in Rambler history, with her 16'11.75" outdoor mark eclipsed only by her 17'3" indoor leap, both in her senior year. Lauren's junior season of 1998 saw one of the singular performances in GCAC history as she took titles in all four of her events Ð the high and low hurdles and the long and triple jumps Ð to score a perfect 40 points. She earned four major letters and was awarded three varsity MVP awards. She qualified for the state finals three years in four different events and led the Ramblers to four straight GCAC titles. At the University of Illinois, Lauren turned to a new discipline that took advantage of her track and gymnastics background Ð the pole vault. She was named Illinois Freshman of the Year in field events. Her career pole vault mark was second on the Illinois all-time best list for over six years. In 2003, she earned her Bachelor of Science in kinesiology from Illinois. Lauren joins her father, Bill (Hall of Fame, 2005) as the first father and daughter members of the Hall of Fame. Her uncle, Tim (Hall of Fame, 2004) is also a member.
Back