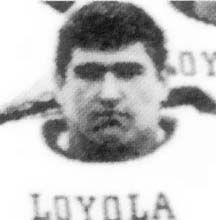 A tenacious, instinctive linebacker and a quick, agile pulling guard, Carl L. Camastro was a player instrumental to the fortunes of two glory teams of the 1960's. Carl made a difference on both sides of the ball. Though his contributions on offense were often hidden from the casual observer, Carl was a devastating blocker, especially when leading sweeps and traps in which he could utilize his speed, mobility, and superb technique. Obvious to all was his defensive dominance. He displayed a pure linebacker's instinct for the ball, and possessed the physical gifts to get to it. As a junior, Carl was a key contributor to the City champions of 1966, one of Loyola's greatest teams. A highlight of the season was Carl's critical interception in the fourth quarter of the Prep Bowl championship against Chicago Vocational, a play which helped turn the tide in Loyola's favor. His senior season of 1967 was magnificent, as Carl set a new Loyola record for tackles with 87, and was credited with 34 assists. He led the team with three fumble recoveries and a blocked punt. His play during the 1967 season brought Loyola to the brink of a third consecutive Catholic League title. Recognition for Carl's superior performance came in a shower of post-season honors: All-Catholic League, All-Area, Chicago Tribune and Chicago Daily News All-State, and New World All-American teams. Carl was recruited to play ball at Indiana State. There he lettered twice and was honored as the recipient of the prestigious I-Man award presented to players of distinction in the Indiana State program. Carl returned to Loyola to coach freshman football in 1973 and 1974. Thereafter he volunteered as an assistant coach at Our Lady of Perpetual Help for 19 seasons.
Back