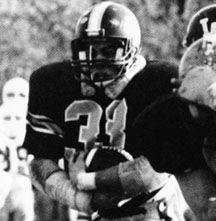 As new head coach John Hoerster (Hall of Fame, 2004) surveyed the field of unfamiliar players going through their drills in the late summer of 1987, it did not take him long to find a kindred spirit, one who shared his passion, his intensity, and his desire to accomplish great things. What he saw in number 33 was a young man of character, pride, and determination as well as a player with the skill and temperament to anchor his defense. Armed with speed, power, and an instinctive nose for the football, James D. Burns brought a physical style of play and an intimidating presence to the field as he roamed the Loyola Rambler defense from his free safety position, leading the 1987 Ramblers to the state playoffs for the first time in twelve years. After earning a starting spot in the defensive backfield of the 1986 Ramblers, and helping Loyola to victory in the Prep Bowl championship, Jim began to prepare in earnest for his senior campaign. His leadership in that off-season proved critical to the 1987 team's success. He inspired his teammates with his fiery enthusiasm and his undisguised love of Rambler football. Though Jim was a steady contributor on offense at halfback that season (scoring three touchdowns), it was on the defensive side that he solidified his place among the elite defensive backs in Rambler gridiron history. A punishing hitter and skilled pass defender, Jim recorded 72 tackles, caused three fumbles, and led the team with six interceptions. A 7-2 record earned the Ramblers their first berth in the state playoffs since 1975. In post-season play Jim raised his performance to another level, with four interceptions in three games: one interception in a 28-8 victory over Glenbrook South, two critical thefts in a tight 14-7 win over Evanston, and a touchdown-saving interception in a tough, season-ending loss to rival Mt. Carmel, 14-7. At season's end, Jim was selected to the All-Catholic League team at free safety, and was named Most Valuable Player of the 1987 team. Upon graduation, Jim enrolled at the University of Iowa, from which he earned his degree in business administration in 1992. He worked for Coca-Cola Bottling for ten distinguished years before moving in 2001 to Roche Pharmaceutical, where he was awarded the Rookie of the Year award. Jim passed away on July 17, 2003 after a year-long battle with leukemia. Throughout that difficult year, Jim demonstrated the same courage, determination, and fierce will to overcome that he had shown in his years on the gridiron wearing the maroon and gold. His pride in and enthusiasm for Loyola football never wavered, and he was buried with his Loyola jersey #33 at his side at the age of thirty-three.
Back