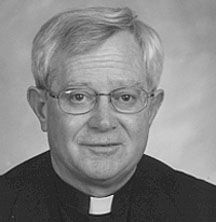 The phrase "leader of men" is as apt as any to describe Father Robert J. Bueter, S.J. A man of immense passion and energy, a promoter, a motivator, a teacher, and a doer, Father Robert J. Bueter, S.J. does not tread lightly through this world. In his forty years of Jesuit life, he has left an indelible mark on the schools in which he has worked and on the young people whom he has served. Back in 1967, he was Mister Bueter, a Jesuit scholastic beginning his three-year regency teaching and coaching at Loyola Academy before continuing his theological studies prior to ordination. His service to the Academy would actually extend to five years, from 1967 through 1972, and in that brief time he made a rich contribution to the athletic identity of Loyola Academy and a lasting impression on those of us who were privileged to be coached by him. From 1967 through 1970, Mister Bueter taught religious studies and coached the cross country and track teams, the former as head coach and the latter as an assistant to mentor Frank Amato (Hall Of Fame, 1990). In 1970, his regency at Loyola completed, Mister Bueter elected to pursue his theology studies at Loyola University Chicago so that he could continue to coach at Loyola. He did not want to leave behind the unfinished business of rebuilding Loyola's track and cross country teams into Catholic League powerhouses. Well-organized, methodical, and attentive to the individual, Bueter was a program builder. He constructed a five-year record in cross country of 47-21 (.691), highlighted by the performance of the 1971 team (Hall of Fame, 1999), which ran undefeated in league competition before claiming the championship trophy with a record low score of twenty points at the Catholic League meet Ð a record that has stood for thirty-four years. At season's end, Bueter was honored with the Lawless Award as Catholic League Coach of the Year in cross country. Ten years later at St. Ignatius College Prep, he would duplicate this feat, claiming the 1981 league title and his second Lawless Award. Bueter's 1982 team went on to finish second in the state, the highest finish ever by a Catholic League team. On the track, he assisted Frank Amato in building two championship teams later inducted into the Hall of Fame: the 1970 team (inducted in 1998) and the 1972 team (inducted in 2001). Bueter specialized in the field events, and through his coaching Loyola routinely built large leads on day one of the Catholic League meet prior to the running events of day two. Bueter not only coached these events, but personally built the original pits in which they were contested. With help from the legendary Jim Bur, Bueter built hurdles from electrical conduit, and high jump and pole vault standards from spare parts and pipe. He dragged, rolled, and lined the cinder track before each meet. Father Bueter earned a B.A. and an M.A. in philosophy from Fordham University, a masters in divinity from the Jesuit School of Theology of Loyola University Chicago, and a Ph.D. from the Union Institute and University in Cincinnati. Since his ordination in 1973, he has served with great distinction in schools throughout the country, most notably as principal of St, Ignatius Prep in Chicago and as principal and then president of Lexington Catholic in Kentucky. His transformation of Lexington Catholic from a school on the brink of extinction into an academic and athletic powerhouse is the stuff of legend in Kentucky education circles.
Back