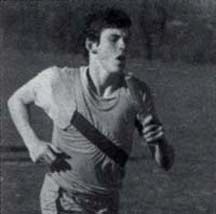 Carey was one of only a handful of truly dominant middle distance runners in Loyola track and field history. A three-year letterman, he captured six individual Chicago Catholic League titles in the 880 yard run and the 440 yard dash. He was also a key member of five relay teams which won Chicago Catholic League titles, giving him a total of eleven Catholic League gold medals. As a junior, Carey won 12 individual races while losing only two. He owned the league half mile. he won the Catholic League title in the 880 with a 1:57.1, then came back to finish second in the 440 dash. In his senior season, Carey was undefeated in 26 races, a feat that may never be replicated. At the Catholic League Championships, he first won the 880 in 1:56.9, then came back to take the 440 crown in 49.7, an incredibly tough double since he also ran a relay that day. Carey's overall record was 44-4 in varsity races, and his bests in the half mile and the quarter each rank among the top three performances in Loyola history. He was the ultimate competitor, respected by his teammates and feared by his opponents, especially on the backstretch, where his fluid, long strides and tremendous second gear would destroy the competition.
Back