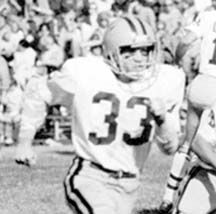 A tailback and return man of blazing speed, an uncanny elusiveness, and a pure runner’s instinct, Christopher J. Brennan threatened to break the long one with his every grasp of the pigskin. A sprinter with the feet of a dancer, he was the offensive catalyst for one of the elite eleven in Loyola football history. However, more than just a talented athlete, he was also the kind of player who proved that success on the playing field is measured by sacrifice and determination, not just by feet and inches.

With two varsity letters already behind him, Chris became in his senior campaign the workhorse – perhaps thoroughbred is more apt – for the State semi-finalist team of 1975 (Hall of Fame, 2002). The art of the graceful, sudden, seemingly effortless change of direction proved his particular forte, and coupled with his lightning quickness, led to game-breaking broken-field runs. In his final campaign Chris ran for nearly 1000 yards, averaging ten yards per carry while leading the Catholic League in scoring. Post-season honors were highlighted with his selection to All-Catholic League, Pioneer Press All-Area, and New World All-American teams. After being named Loyola’s Most Valuable Offensive Player, Chris capped a brilliant season and prep career with an invitation to represent the Catholic League in its annual All-Star game against the Public League. He emerged from that contest as the game’s leading ground gainer, scoring twice while leading the Catholic League squad to a decisive win and earning the game’s Most Valuable Player honor.

Chris’ gridiron brilliance was mirrored by a string of scintillating performances on the track during his single varsity season in his junior year. A sprinter, low hurdler, and relay man, he blazed to a 10.2 second in the 100-yard dash, a 22.3 in the 220-yard dash, and a blistering school and league record-setting 38.3 in the 330-yard low hurdles (with the event now retired, this remains the Loyola and Catholic League record). His 5.4 in the 50-yard dash at the Evanston Relays tied the fieldhouse and meet record that still stands today. In Loyola’s inaugural season in IHSA competition, Chris qualified for the 1975 State finals in the low hurdles, missing a spot in the final heat by .4 seconds.

Chris played two years of Division I football, first at the University of Illinois and then the University of Wisconsin before back and knee injuries ended his career. He earned a BA in economics and finance from Wisconsin and an MBA in accounting from DePaul.
Back