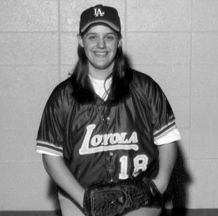 Armed with competitive fire, team-first selflessness, and unquestioned diamond savvy, Julie E. Bumgardner proved to be the consummate sportswoman and a coach's dream. Indispensable with both bat and glove, Julie anchored Rambler softball fortunes while earning a deserved reputation as a leader and a winner. A slugger and a dependable infielder, she delivered both power and consistency at the plate while commanding the defense with flawless glove work, a strong arm, and tremendous range. Most important, Julie brought to her play those qualities that best define her legacy and commitment to the common cause, trustworthiness, integrity, and an abiding love for and knowledge of the game. A rare four-year starter for the Ramblers, first at catcher and then at shortstop, she complied a sparkling .421 batting average (.536 in her senior campaign) while earning GCAC All-Division (1993, 1994, 1995, 1996), All-Conference (1994, 1995, 1996), and All-Area (1995, 1996) honors. She was a repeat selection to the Chicago Sun Times Top 100 list. A two-time captain (1995, 1996), Julie led Loyola to a 77-30-1 record that included three straight GCAC North titles (1994, 1995, 1996) capped by an IHSA Regional title to close her prep career. Following her graduation from the Academy, Julie embarked on a brilliant career at University of Illinois-Chicago. A two-time captain (1999, 2000), she parlayed a .320 career batting average and middle-infield defensive mastery into an All-Star resume while leading the Flames to a four-year domination of the Midwest Collegiate Conference. The UIC record book testifies to her enduring legacy, with her name remaining on the career all-time top ten list in seven categories (hits, RBI's, doubles, home runs, at bats, walks, and games) and on the single season all-time top ten list in three categories (games, hits, and home runs). Selected to the NFCA All-Region team (1998), MCC All-Conference (1998, 1999), and MCC All-Tournament (1999), Julie anchored a Flames' dynasty that saw four straight MCC titles, a .741 winning percentage, and an NCAA record-tying 67 wins during the Hall of Fame season of 1999.
Back