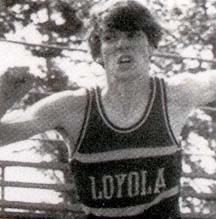 John M. Brannigan, with a brilliant, record-setting series of championship meets to end his high school track career, established himself as the greatest hurdler in Loyola track and field history. After a successful junior year in which he placed fourth in the 110 meter high hurdles and second in the 300 meter low hurdles at the League meet, and a respectable fifth at the Sectional meet, John's senior season began ominously. For most of the all-important indoor season, John was sidelined with a serious bronchial infection leaving him a forgotten name among the Illinois hurdling elite. After slowly making his way back, John exploded at the end of the outdoor season with a string of record performances. At the Catholic League championship meet, John claimed a League title in the 300 meter low hurdles and a second in the 110 meter high hurdles, setting new Loyola records in each and earning his second All-Catholic League selection. A week later, John stunned the Sectional competition with championship runs in both hurdles races, again posting new Academy records. He saved the best for last when, at the State championship meet, John placed fifth in the State in the 110 meter high hurdles while once again lowering his school record in that event. At season's end, he was selected to the 1986 All-State team, and was named Loyola's Most Valuable. After graduation from Loyola, John attended Notre Dame where he had a solid hurdling career and earned a varsity letter. His records in the 100 meter high hurdles (14.3) and 300 meter low hurdles (38.2) still stand thirteen years later.
Back