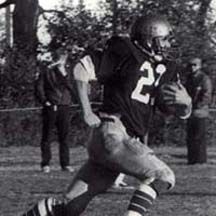 Jim Boyle takes his rightful place in the proud tradition of truly great two-way backs at Loyola. As a junior, it was Jim's defensive work which first established his reputation. He set a school record for interceptions in a game with four against Gordon Tech. That year he was named to the All-Catholic League team as a hard-nosed cornerback with a great ability to close in on the player or the ball. While he remained one of the top corners in the league, it was at running back that Jim, a team captain, launched his explosive senior season, and the honors poured in. A tremendous breakaway threat, he led the Catholic League in scoring that year with thirteen touchdowns. He was twice named Player of the Week. He was Loyola's top rusher and interception leader. At season's end, he was chosen MVP by his teammates. For the second straight season, he was named to the All-Catholic League team, this time in the offensive backfield. He was selected to the All-Chicago Area team, and was named All-State Special Mention. Jim was also a three-year starter in basketball and captained the team as a senior. He was awarded a four-year scholarship to Holy Cross, where he was a four-year letterman. Drafted in 1985 by the Birmingham Stallions of the USFL, he instead signed with the Ottawa Roughriders of the CFL.
Back