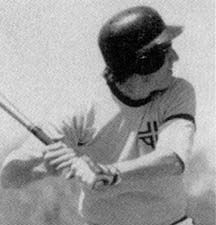 Strength up the middle is one of the requisites of winning baseball. From 1977 to 1980, Eric T. Bolling and his indispensable skills as a hard-hitting shortstop proved instrumental to Loyola's diamond success, and clearly established his credentials for entry into the Athletic Hall of Fame. A four-time varsity baseball letter-winner, Eric displayed all the talent necessary to be an outstanding all-around player. He could hit, run, throw, and even pitch if needed. He was equally effective both in the batter's box and in the infield. On offense, he was a fine, consistent hitter, with a career average of .343 that included a .420 junior season. During both his junior and senior campaigns, he led the Ramblers in runs, extra base hits, and runs batted in. On defense, he was an anchor at shortstop - his glovework was sure, his range excellent, his decision-making astute. However, it was his leadership skills that set Eric apart from the rest. He took a team, made-up mostly of sophomores and juniors, on his back and carried it to the Regional championship game. Although the Ramblers lost a hard-fought game, Eric Bolling's legacy as one of Loyola's all-time great baseball players was secure. Eric's all-around excellence was recognized with his selection to the All-Catholic League and All-Area teams following both the 1979 and 1980 seasons. A multi-sport athlete, Eric also excelled on the varsity soccer (All-Catholic League) and basketball teams, earning a total of ten letters at the Academy. After graduation, Eric took his bat and glove to Rollins University in Florida, where he played on a full scholarship. There he led the Rollins nine to second in the nation in the 1984 NCAA Division II championships. Eric was drafted by the Pittsburgh Pirates and, leaving behind a fellowship at Duke University, he entered the Pirates farm system. A shoulder injury, however, soon cut short his career.
Back