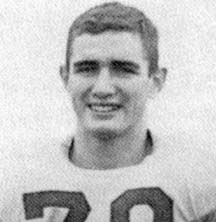 Versatile, tough-minded, and workmanlike, Michael B. Bolan distinguished himself on the Rambler gridiron as a two-way player excelling at as many as five different positions. A center and guard during his first two seasons, Mike played fullback during his junior campaign. However, in his senior season of 1958, Mike settled in as the anchor of the Rambler line, and enjoyed a splendid season as an offensive guard and defensive tackle. His unconditional dedication, tireless effort, and football savvy culminated in senior-year elections to the All-North Section, All-Catholic League, and All-Chicago teams. A competitor nonpareil, Mike impacted more than just the football field as evidenced by his graduating with honors as senior-class president. The recipient of a student/athlete scholarship, Mike opted for the University of Colorado, where he played on both sides of the ball, alternating at guard/center and linebacker. During his tenure, the Buffaloes in 1961 forged a Big Eight championship, a bid to the Orange Bowl, and a Number 6 ranking in both the UP and AP polls. A 1962 selection to the pre-season Big Eight First Team reckoning bottomed out when injury forced him to the sideline for the entire season. While embarking on a legal career, Mike served two years as an assistant coach at Mt. Carmel. Mike undertook rugby in 1964, a sport which recently honored him as the lone clubber to log five decades of play. For the past seventeen years he has served as a Circuit Court Judge of Cook County. Mike and his wife Sande, parents to six children.
Back