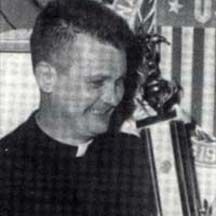 Father John Beall called Loyola home for 36 years. In the memories of thousands of now aging men, the names Loyola and Beall are inseparably linked. He has truly been a "man for others," and a great friend to Loyola's athletes. Fr. Beall entered the Jesuits in 1942 after graduation from St. Ignatius High School. He attended Loyola University, earning a BA in Latin in 1948 and an MA in Latin in 1950. Fr. Beall was ordained in 1955, came to Loyola in 1957, and has remained a defining part of Loyola life ever since. He has served Loyola in many ways: principal, assistant principal, Dean of Students, his 27 summer sessions in Spain, his annual Life of St. Ignatius Loyola lecture, his Latin classes. Fr. Beall has had a long association with the Academy's athletic program. He served as team chaplain for many, many years and has led countless team masses and retreats. He has always been a fixture at practices and games. He even coached swimming in the early 1960s, and claims that he "taught Dick Shiman everything he knows."
Back