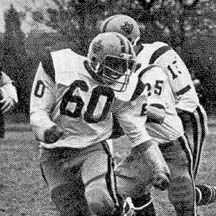 A driven, intense battler, Joseph L. Battaglia was a warrior in the trenches, ruling Catholic League line play from his offensive guard and defensive end positions. Lacking dominant size, Joe countered with superior strength, speed, agility, technique, and finally, an unrivaled work ethic. A relative lightweight carrying only 250 pounds, Joe took the field armed with a 425-pound bench press, a 4.8 40-yard dash, cat-like mobility, and textbook technique. Above all, he competed with fire in his belly. He prepared harder, practiced harder, and played harder than anyone else on the field. A two-year, two-way starter for the Ramblers, Joe followed an All-Catholic League season as a junior with a final campaign rich with individual and team accomplishment: He topped a second successive All-Catholic selection with a berth on the 1975 All-State team. As Loyola's Most Valuable lineman, he led one of Loyola's finest teams (Hall of Fame, 2002) to a Catholic League title and its first IHSA semi-final game. He ended his high school career with a selection to the inaugural Catholic League-Public League All-Star game. Joe was also an outstanding wrestler, leading Loyola's grapplers with most wins and pins as a junior and senior, clamming two MVP's, and the 1976 league title. Joe launched his collegiate career with two seasons as a starter for Northeast Missouri State (now Truman College), and in 1977 earned All-MIAA honors on the league championship team. A transfer to Purdue University and Division I football brought Joe a new challenge. He responded with two varsity letters: the first as a junior contributor to a tenth-ranked Boilermaker squad followed by a second as the starting offensive guard for the twelfth-ranked team in the nation. Along the way he helped Purdue to two straight Big-Ten runner-up spots and successive post-season victories, in the Bluebonnet and Liberty Bowls, respectively. He capped a superb season and career with his selection to the All-Italian American team.
Back