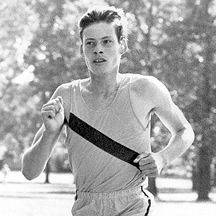 Lean, long-striding Kevin J. Barr ran in the shadow of one of Loyola's greatest distance men, and did so with a steady brilliance. In a career of gritty determination and sometimes obscured accomplishment, he proved the consummate team performer, playing a pivotal role in the dramatic fortunes of the title heavy Ramblers' track and cross country squads of the early 1970s. After a solid if unspectacular junior year, Kevin blossomed in his two senior campaigns of 1972-73 and emerged as a dominant runner in the Catholic League in both cross country and track. With running mate Doug Smith (Hall of Fame, 1984), Kevin gave the Ramblers a firm hold on CCL distance events ranging from 880 yards to three miles. His only competition came from the friend and teammate at his side. A competitor armed with tremendous resolve and toughness, Kevin prepared in grueling fashion during long workouts in the summer heat of July and August heading into the 1972 cross country season. Payoff came in a string of superb performances over CCL three mile courses, punctuated by his runner-up finish in the league championship behind Smith. Their one-two finish swept Loyola to its second straight league title, and affirmed the Rambler duo's ownership of distance races in the Catholic League. Over the course of that senior season, competing in a conference studded with talent, Kevin never lost a cross country race to any other Catholic League runner save teammate Smith. In his final track season, Kevin co-captained the Ramblers to an undefeated season and their fourth consecutive CCL title. Kevin proved the master of the middle-distances, distinguishing himself in the half-mile, the mile, and the relays as he piled up 130 points toward Loyola's title journey. On numerous relay teams he served as the anchorman and the ultimate closer. A consistent sub-two minute 880-yard man, Kevin again was unbeaten against all other Catholic League competition. He took seven of nine half-mile races in the spring of 1973, with both losses coming to the inestimable Smith. Kevin's furious drive down the final straightaway of his final 880-yard race, in which he closed within mere inches of Smith and the title, provided a fitting climax to a first-rate career. "Kevin was Loyola's number two," former coach Art Morelli recently observed, "but what a number two he was." Upon graduation from Loyola, Kevin attended Marquette University, earning his B.A. in 1977.
Back