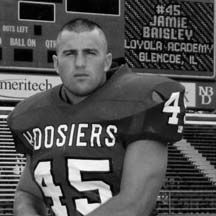 If football is a game of rapid, violent collision, then James M. Baisley proved himself one of its undisputed masters. Some long-time observers of the Loyola Academy gridiron scene argue that he was the hardest-hitting player ever to don the maroon and gold. Beyond argument is his place as one of the greatest defensive players in Rambler history, who during his prep career dominated from his free safety position before taking his game to the Big Ten, and eventually, the professional leagues. Studious, quiet, and amiable off the field, Jamie roamed the defense like a man possessed. He intimidated opposing offenses with a lethal combination of speed, size, strength, and absolute ferocity. A key component to the resurgence of the Loyola football program in the early 1990's, Jamie started his first varsity game at safety against Fenwick midway through his junior season and never looked back. In that contest, a memorable overtime Rambler victory, he picked off two passes and displayed the hard-hitting style of play that would make him a feared presence in Catholic League football for the next two years. As a co-captain his senior year, Jamie led Coach John Hoerster's squad to an undefeated 11-0 regular season, a Catholic League championship, and a State semi-final berth. Jamie's contribution to the title run included 145 tackles and five interceptions (career totals of 243 tackles and ten interceptions). At season's end he was honored with All-Catholic League, Pioneer Press All-Area, and Chicago Tribune All-State recognition. Upon graduation from Loyola, Jamie accepted a scholarship from Indiana University, where he lettered four years, starting at middle linebacker his final two campaigns. As a senior co-captain for the Hoosiers in 1996, Jamie led Indiana with 105 tackles, good enough for third in the Big Ten, and was named winner of the Balfour Award given each year to the Indiana player who brings "honor and distinction" to the University. Jamie played five years of professional ball, including two seasons as starting middle linebacker with the NFL Europe World Bowl champion Rhein Fire, and stints with the Denver Broncos, Jacksonville Jaguars, and Seattle Seahawks. In 2000, Jamie was named first-team, All-NFL Europe. Fittingly, he came home to play his last season of football with the Chicago Enforcers of the XFL.
Back