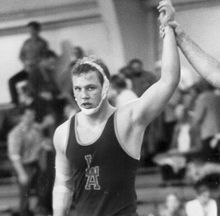 Standing at the summit of Mt. Whitney, at 14, 597 feet the tallest mountain in the continental United States, Christopher A. Baer had realized a dream. The sense of accomplishment was profound. The qualities necessary for such a feat--the uncompromising devotion to a task and the persistent willing of the self to complete it--were perhaps forged long ago during countless hours of pain and sacrifice perfecting his craft on the wrestling mats at Loyola Academy.    His introduction to the sport in the sixth grade lit a fire in his belly, a fire that fueled a sparkling four-year career. Armed with tremendous quickness and power, Chris coupled a natural mat awareness and consummate technique with an unstinting work ethic. After a freshman campaign that ended prematurely with a broken ankle and a sophomore season that saw a 15-2 record and a CCL title, Chris was ready for the next level. There he made his mark, building a two-year varsity record of 50-12 (with a near-perfect 18-1 in CCL competition) that included eight top-three finishes and four individual titles.     Wrestling at 167 pounds in his junior year, Chris went 22-6 while winning two of three tournaments and his first varsity CCL title. In his final year as a Rambler grappler, Chris carved out a 28-6 mark, placing in the top three in all five major competitions while claiming two titles. His second successive CCL title, this time at 185 pounds, was topped only by Loyola's first IHSA District team championship, a fitting close to a sterling prep career. A standout on the gridiron, Chris was awarded the prestigious Skoglund Award for his play at nose guard and his scholarship in the classroom.    Upon graduation from Loyola in 1981, Chris entered North Park College, where he earned two varsity letters. As a freshman, he wrestled to a third place finish in the CCIW tournament at 190 pounds and all signs pointed to his contending for a conference title the following season. Unfortunately, he sustained a severe neck injury during a throw early in his sophomore season, and he was forced to cut short a promising collegiate career.    Chris earned a degree in business administration from North Park College and, later, an A.A.P. degree in automotive manufacturing.
Back