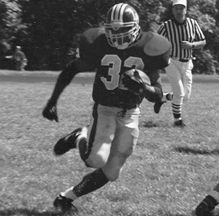 Along the long maroon line of top-flight Rambler ball-carriers stand the elite in Loyola's proud football history stalwarts like Markey, Marks, Spellman, Cerney, and Pooler, just to name a few now enshrined in the Hall of Fame. They must now make room in their company for one more. Adrian R. Autry was arguably the greatest running back of them all. As Loyola's go-to halfback on two of the most accomplished teams in Rambler gridiron history, Adrian brought the complete physical package a heady mix of quickness and speed, balance and power, vision and toughness. He possessed the superior runner's instinctive ability to slow the game down, to see the field, and to find daylight inside and outside the trenches. After playing a key role in the Ramblers' journey to the IHSA final in his junior season, Adrian took over as the marquee offensive threat during the march to the 1993 state title. As Loyola began its historic run, he was the one called upon when the pressure was on and someone had to deliver critical yards. Through the first half of that season of destiny, he was the finest running back in the state of Illinois, arguably the finest player in the state at any position. In the first six games, Adrian proved virtually unstoppable, assaulting the Loyola record book as he rushed for over 1000 yards and a jaw-dropping 170 yards per game. Along the way, he fumbled only once, remarkably the only fumble of his prep career. Disaster struck, however, in his sixth game, and it would prove to be the last of his Rambler careerÑa torn knee ligament ended too suddenly a spectacular senior campaign. Despite being forced to watch the team's final ascent to glory from the sidelines, Adrian still earned All-Catholic, All-Area, and Honorable Mention All-State honors in recognition of a season of brilliant play. Accepting a full scholarship to Northwestern, Adrian launched an accomplished collegiate career. He returned kicks and did spot work in the backfield during his sophomore and junior years as the Wildcats claimed two Big-Ten titles and successive trips to the Rose Bowl and the Citrus Bowl. Named the starting halfback in his senior year, Adrian made the most of his opportunity. He led Northwestern in rushing with 1049 yards and a sterling 4.3 yards per carry while twice being named Big Ten Offensive Player of the Week. He finished the season as one of the top rushers in the nation to close a splendid career. Adrian earned his bachelor's of science degree in education and social policy.
Back