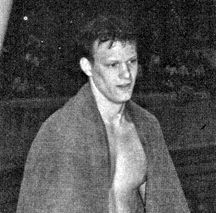 Though the tragic events of May 20, 1988 surely altered the shape of his young life, they also just as surely revealed its character. A twenty-one year old college student's heroic courage and resourcefulness, his preternatural composure in the face of chaos and uncertainty, had its roots in many places. Perhaps some of it was forged in the long and lonely hours of discipline and sacrifice staring at the bottom of a pool as he churned out lap after lap on the way to becoming a champion swimmer. An accomplished swimmer at both the high school and college level, Philip J. Andrew proved himself the embodiment of persistence, resilience, and leadership. At Loyola, he captured the 1984 Catholic League title in the 500 freestyle in his junior year before preparing to move down to the freestyle sprints for his senior campaign. However, adversity came by the way of a six-week illness that kept him out of school and the pool. Returning to the team only two weeks before the Catholic League Championship, Phil rallied himself to a CCL gold medal in the 200 free as well as in the relays, and led the Ramblers to a league title. One week later, at the IHSA Sectional, he placed second in both the 100 and 200 free, earning a trip to the state finals. Sprinting to 8th in the 200 free and helping his team to 6th place in the 400 free relay, Phil capped his prep career with two top-ten finishes at the state championship meet. He distinguished himself in the pool again as an All-State water polo player, captaining Loyola to a runner-up finish in the state finals. Phil took a full scholarship to Champaign and the University of Illinois. At the end of his junior year, in which he served as the Illini team captain, he had a share in two school relay records, and he looked forward to a summer of swimming in preparation for a big final campaign. He had just returned home from school the night before that late May morning that changed his life. When his family was taken hostage by a deranged woman with a gun, he responded to the crisis with courage and calm as he tried to defuse the situation. After he finally tried to disarm her, she shot him in the chest without warning, the bullet puncturing both lungs, severing his esophagus, and ripping through his stomach and pancreas. For his actions that tragic day, Phil was honored with a U.S. Congressional Award for Heroism and Bravery and was nominated for the NCAA Valor Award. After a long, slow recovery, he returned to Illinois and his swim team, captaining them in 1989 and 1990 while setting school records in the 400 free and 800 free relays in 1990. While still at Illinois, Phil became a voice for handgun control and formed the Illinois Council Against Handgun Violence with Loyola classmate Dan Kotowski. Upon completion of his B.A. in history from Illinois, and a subsequent J.D. from DePaul University College of Law, Phil worked for the U.S. Attorney's Office before launching a career with the FBI in 1997.
Back