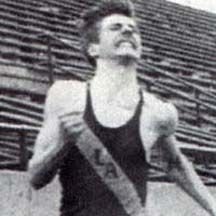 Chuck Whittingham was a truly great sprinter, running superb times in an era when runners ran on cinder tracks, wore long spikes, and dug their own starting holes, conditions hardly conducive to speed. As a high school runner, Chuck held the Loyola school record in the 100-yard dash, running a 10.2. He took second place in both the 100 and 220-yard dash in the Catholic League Championships his senior year, while also anchoring the 880-yard relay team to victory. It was at Loyola University that Chuck's running career reached another level of excellence. He set Loyola University records in the 100-yard dash (9.6), the 220-yard dash (21.8) and the long jump (23' 6"). In his junior and senior years, he did not lose a 100-yard or 220-yard race, an incredible accomplishment. Chuck competed in the biggest track meets in the country. From 1948 to 1951, he ran on winning 880-yard and spring medley relays at the Drake, Kansas, Texas and Penn Relays. Chuck's spring medley team set a National Intercollegiate record at the Texas Relays in 1951. Because of his outstanding collegiate career, Chuck was inducted into the Loyola University Athletic Hall of Fame. Chuck went on to a long career with Time, Inc., as publisher of Life and Fortune magazines. He later went on to become the Executive Producer of Television Documentaries for PBS.
Back